Background: Hepatic encephalopathy (HE), a neuropsychiatric complication of decompensated cirrhosis, is associated with high mortality and high risk of recurrence. Rifaximin add-on to lactulose for 3 to 6 months is recommended for the prevention of recurrent episodes of HE after the second episode. However, whether the combination for more than 6 months is superior to lactulose alone in the maintenance of HE remission is less evident. Therefore, the aim of this study is to evaluate the one-year efficacy of rifaximin add-on to lactulose for the maintenance of HE remission in Taiwan.

Methods: We conducted a real-world single-center retrospective cohort study to compare the long-term efficacy of rifaximin add-on to lactulose (group R + L) versus lactulose alone (group L, control group). Furthermore, the treatment efficacy before and after rifaximin add-on to lactulose was also analyzed. The primary endpoint of our study was time to first HE recurrence (Conn score ≥ 2). All patients were followed up every three months until death, and censored at one year if still alive.

Results and conclusions: 12 patients were enrolled in group R + L. Another 31 patients were stratified into group L. Sex, comorbidity, ammonia level, and ascites grade were matched while age, HE grade, and model for end-stage liver disease (MELD) score were adjusted in the multivariable logistic regression model. Compared with group L, significant improvement in the maintenance of HE remission and decreased episodes and days of HE-related hospitalizations were demonstrated in group R + L. The serum ammonia levels were significantly lower at the 3rd and 6th month in group 1. Concerning changes before and after rifaximin add-on in group R + L, mini-mental status examination (MMSE), episodes of hospitalization, and variceal bleeding also improved at 6 and 12 months. Days of hospitalization, serum ammonia levels also improved at 6th month. Except for concern over price, no patients discontinued rifaximin due to adverse events or complications. The above results provide evidence for the one-year use of rifaximin add-on to lactulose in reducing HE recurrence and HE-related hospitalization for patients with decompensated cirrhosis. 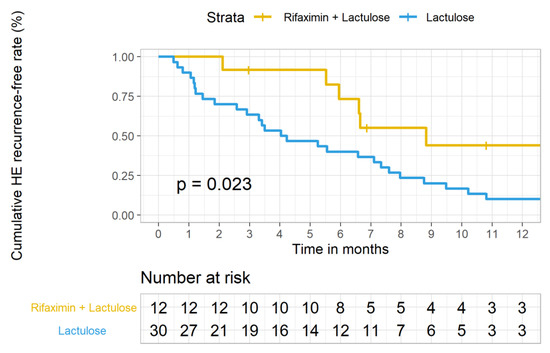